Remember that "promising estate sale" that I mentioned in my last post?  Well, Mr. Modtomic, his girlfriend, and I devised a plan, split up the potential spoils, and showed up super early so that we could stake our claim.  We were all alone in line, so we were feeling pretty smug.  Then after half an hour of waiting a fellow early-morning-riser came up and ripped a number off the pad on the front doorstep.  Numbers?!  There weren't supposed to be any numbers!

To our dismay, the estate sale company, Steve & Sheri, changed the rules at the last minute and put out numbers the night before.  Of course, all the dealers had already taken their spot at the top and we were 7, 8, and 9.  Dang!  I'd printed the sheet in the late afternoon and the change wasn't on there, so it must have happened in the evening.  Who does that?

After that fiasco, we decided to head on over to Denny's and drown our sorrows in savory breakfast meats, starches, and maple syrup.   However, I remembered that I'd also printed off the info for a "retro flea market" that we'd wanted to see but didn't think we'd have a chance to get to due to the conflicting estate sale.  Might as well check it out, right?

I'm glad we did, because that place was a treasure trove of MCM deals.  It actually wasn't really what I'd call a flea market.  It was more a mid-century modern cast-offs sale, where most things were a little dinged up, but there were plenty of goodies to be had at very reasonable prices.

The owners of Rocket Century, who put on the sale, were even kind enough to take Mr. Mod and I in and show us around their shop.  It's always fun to meet people who share the same interests and wow!  They've got quite a collection - everything from Adrian Pearsall coffee tables to Cold War propaganda posters can be had there.  It's a veritable repository of mid-century modern collectables.

After Mr. Mod and I split, I headed back to the first sale, just to see if I could make a go of it.  As expected, it didn't turn out well.  Not only had the estate sale manager changed the rules at the last second, but one of the dealers had taken the first few numbers for himself in order to delay everyone else getting in behind him.  I even overheard the manager and him whispering off to the side about where the items of interest were and how they were priced.  What a crock!  I know that dealers are repeat customers, but everyone should have to play by the same rules.  If you can't stick to them, why even have them in the first place?

So I missed out on my set of Lane Acclaim step end tables and a coffee table, which was a big disappointment.  I've already got a set, but they are covered in water marks from the previous owner and the finish is completely shot.  Here was my chance to get some in what was described as "perfect condition", but a scandalous estate sale company and dealers blew it.  Can you tell that I'm bitter about the experience?  BECAUSE I AM.

Well, after that I decided to take my friend Jon, who needed some furniture for a new place of his own, along for a second go round at Rocket Century and ended up adding a few more items to my load (more on them later).  Unfortunately, I left behind the gorgeous Jens Risom Sofa (which looked almost exactly like the one pictured below) that I'd been eyeing up the whole time.  That thing was HOT, but it it looked like a cat/dog/some kind of vermin got ahold of it and it needed reupholstering.  Hopefully some kind soul will take it in and give it the love and attention that it deserves. 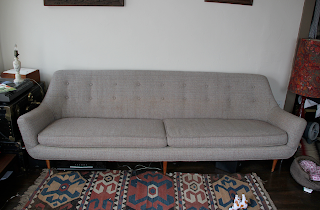 With the van already bursting at the seams, Jon and I headed up to the Ron Paul rally at Lindenwood University, but on the way I stopped and for one last pick: these two Danish lounge chairs (first is mine, second is his). 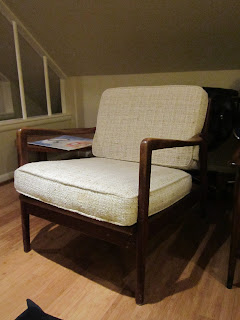 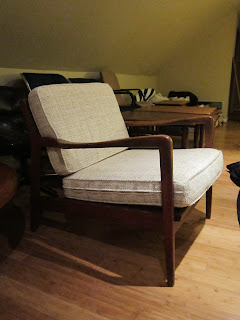 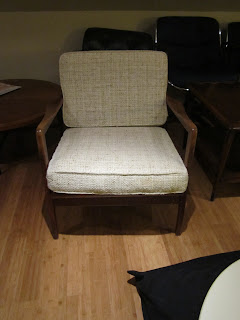 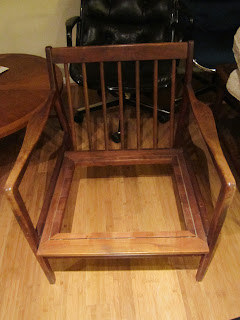 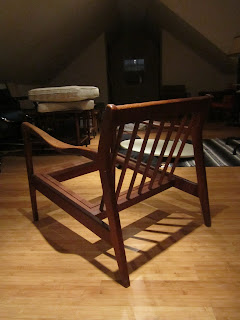 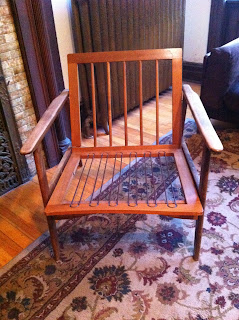 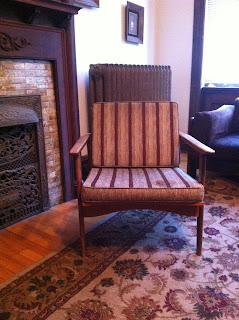 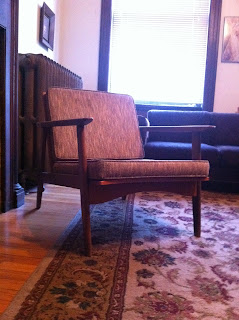 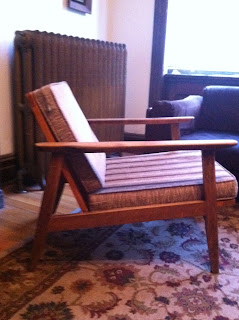 Anyone have any idea who the manufacturer is?  These things are pretty ubiquitous, so I haven't really put much time into learning how to identify them.  The only one I know is Baumritter, but those are usually tagged, right?

So we've gone through the whole range of emotions here today.  There was excitement, disbelief, disappointment, and joy.  In the end, I'd spent some time with good friends, made a couple new ones, and brought home a huge haul to boot.  Can't ask for anything more than that!
Posted by nickarmadillo at 8:17 AM