Is it "Jax" or "Jacks"? Somebody needs to clear this up. 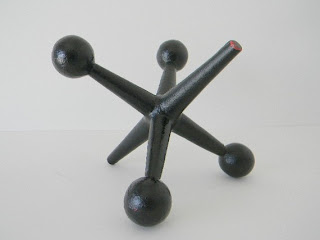 Ahhh, the jax bookends and doorstops...

I've been looking for a set of these little guys for a while, but the number one rule of thrifting (if you are seeking for something specific, you'll never find it), as always, has held true.

Surely they must be fairly cheap on Ebay or Etsy, right?  I mean it's just a simple painted cast iron form.

One name keeps the price of these items sky-high: George Nelson.

After seeing this attribution, I'd resigned myself to a life without playground game-themed decor.  However, Mr. Modtomic did a great write-up a while back in which he stated that he believed them to be designed by Bill Curry, founder of Design Line, Incorporated, who also happened to design a jax coffee table. 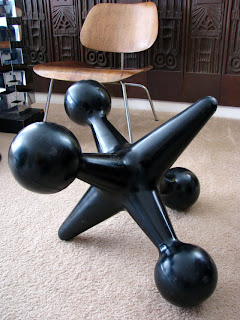 I did a bit of research on my own and found a number of threads discussing the origin of the jax, but nothing definitive.  That is until now... 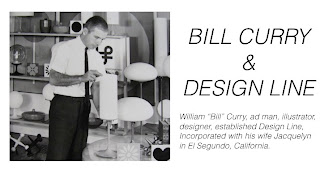 Yes, that's Bill Curry and his elusive jax.  It turns out that an old friend (supposedly) of the Curry family started a blog to set the record straight.

"Bill was my father's best friend and when Bill died in 1971 at the age of 43, my father married his wife Jacquelyn.  Together they did their best to keep Design Line, Inc. alive. The 70s weren't kind to a design company so rooted in the 1960s, so they packet up the remaining inventory and called it quits in 1977. Sadly, Jackie died a few years later in 1985.

Now decades later, my father dusted off a box of Bill's work and its contents - photographs, blueprints, sketches realized and unrealized, letters, writings, brochures, and clippings will help me tell you about Bill Curry and Design Line.


And as for setting the record straight, the Jack bookend (cast-iron prototype shown) is often in various locations on the web incorrectly attributed to George Nelson.  Design Line, Inc. produced a 6" 3 lb rough iron casting in 12 colors which sold for $7, the brass were $9 and a slightly larger 9" 9 lb version and also made a large plastic table base Jack."

I know.  I know.  It's a blog and anyone could just make this stuff up, but what motivation would they have to do so?  It seems pretty legit to me, especially given Curry's other designs.

I also found that a number of manufacturers produced unlicensed copies, of which they sold vast quantities.  So perhaps my quarry will one day turn up at a reasonable price.

Until then, I think that we can call this case (almost) solved!

Posted by nickarmadillo at 11:22 AM