Where was everyone this weekend?

Either there was a huge MCM estate sale or everyone was too busy watching World Series coverage this weekend, because the thrift stores in St. Louis were hot, hot, hot!

I didn't make it out all that early and I still managed to score this: Yes.  This Broyhill Brasilia gentlemen's cabinet sat at the Salvation Army a whole 2 hours before I showed up.  You can imagine my disappointment when I strolled in and saw another customer giving it the once-over with the tag in-hand, but then he left it behind!

Overpriced perhaps?  Nope!  You wouldn't believe me if I told you what they were charging.  The cashier even gave me a discount off of the ticketed price.  "That's a lovely cabinet," she remarked.  Yes.  Yes it is.  In fact, I'd say that Broyhill Brasilia is my favorite mass produced mid-century line, so this was quite a find.

After checking out, I had a little look around the rest of the shop and found a fabulous mid-century Basset bedroom set with intricate carved wooden handles, a retro ceramic and brass lamp, a svelte velvet sofa, and a few smaller items.  Usually the thrifts are pretty sparse once noon rolls around, but the pickings were equally good at every stop.   It was too bad I had to switch out the van for my sedan early in the afternoon.  I would have picked up all of these mid-century goodies.

It's hard to tell from the photos, but the cabinet was is in what I'd call "fair" shape.  There were a few small chips in the veneer along the bottom edge, some surface scratches/gouges, and a water spot on top.  Nothing too bad, but it definitely needed work.  I'd intended to get pictures before I applied the Howard's, but as you can see, my excitement got the best of me.  Oops.  This is after one quick rubdown, so I'll post the finished photos later. 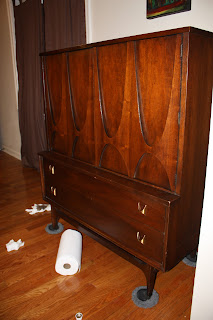 It works really well in the dining room with my Kent Coffey Perspecta dining set, as the two look somewhat similar, but the Brasilia definitely has a bit more flair.  Don't you think? 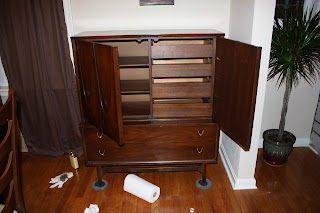 I love it!
Posted by nickarmadillo at 2:49 PM