Christmas is just around the corner (or at least that's what retailers seem to want us to believe), so you better get shoppin' and stimulate that economy.  If anyone is at a loss for ideas of what to get me, you're in luck!  I've found this teak mid-century modern boomerang desk on Craigslist.  It's basically my dream desk. 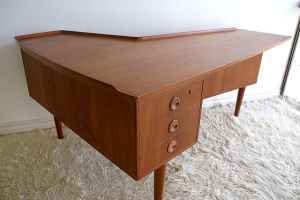 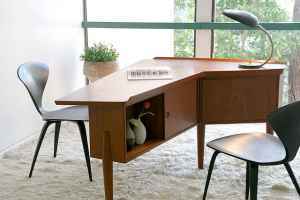 It's finished on all sides and has a built-in minibar and bookcase, all for only $1200.  A bargain, I say!  That's not asking too much, is it?

In other news, we've (hopefully) got everything ready to go with the roof.  Unfortunately, the inspection company only covered 2/3 of it.  While I would have preferred that they paid the whole thing (as it was, you know, their fault), covering the extra several hundred dollars was much easier than taking them to court.  It's a good thing they waited to get back to me until AFTER all of our great weather passed and we are now firmly in the dreary, rainy part of the year.
Posted by nickarmadillo at 6:34 AM